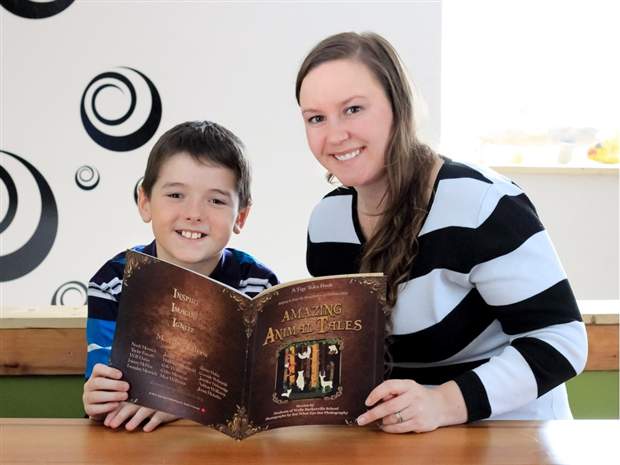 Having trouble getting your kids to read?

How about giving them family-friendly books written for children and, more importantly, by children.

That is the idea behind Big Heart Publishing, a B.C. publisher that was a Small Business B.C. award finalist for Best Concept.

“The benefit is they’re books written by kids for kids,” said Lynn Stevens, who co-owns the company with mother-in-law Tammy Brown, of Wells, B.C. “They’re basically telling us what they want to read and write. But it’s also to inspire other students to write a story they might want to write. And to get published is the reward aspect (for the kids). It’s an inspirational thing. They’re written in a different type of language, I guess.”

The philosophy of Big Heart Publishing, which was established in 2014, is simple: A child’s imagination is a powerful gift with amazing stories to tell, especially when encouraged and supported.

Big Heart has sold about 400 books, with part of the proceeds going to the schools the child authors attend, or to charities.

The company has two full-time employees, Stevens and Brown, along with seven part-time employees twice a year for three-month periods when the books are published.

Stevens, who runs See What Eye See Photography, said Big Heart developed after she started a project in Wells using photography to inspire students to get more involved in writing.

“It was a success. And my mother-in-law owns a multimedia company, so they do everything from website design, logos. So, I approached her and … the numbers looked good and we thought, let’s go ahead.”

Stevens said she was inspired by one of the local students who was having a difficult time in school, but wanted to read and write. “We provide the inspirational images, and the kids write the books for other kids to read.

“The stories are mainly animal- and insect-based. They get an image card with the name of the animal, where it’s found in the world, and then three fun facts about it that they can either include in their story or not include. They use that to inspire their stories, so they create a title, a plot, a problem, and a resolution.”

“The books are anywhere from 24 to 36 pages. It depends on the class size.”

“There are 120 (children) who have written stories in the six books. Each book is written by a classroom, one story per student. It’s kind of a collection of short stories.”

Stevens said that so far the company is pretty much breaking even.

Big Heart’s Tiny Tales Book Series, with titles like Cariboo Kidlets and Amazing Animal Tales, is published with help from the students of the Wells-Barkerville School in Wells.

Ten-year-old James Escott is proud of a short story he wrote for Amazing Animal Tales called “James and The Golden Eagle”.

“When we first started doing it, I didn’t really like reading that much,” said James. “After I started to write my story and started to get going, then I really started to like reading. Everybody in my class participated.”

The story is about how a golden eagle saved a boy named James after he nearly fell from a tree while trying to save an eagle’s nest.

“He was really, really scared,” James said about his short story. “Then an eagle came out of nowhere and saved James. The eagle brought him to the ground. James looked at the Golden Eagle and knew that they would be friends for life.”

James’s father Cory Escott said his son now loves books. “It helps him be creative. This has really pushed him to want to read more.”